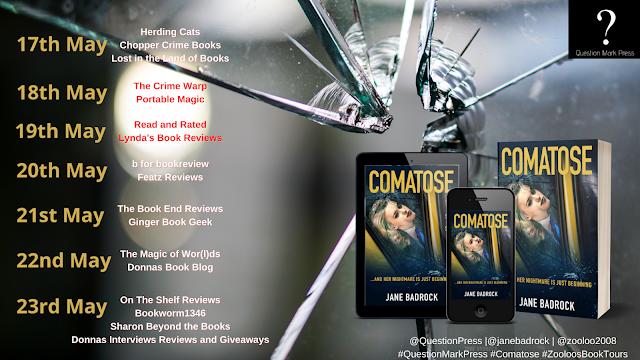 Huge thanks to Zooloos Book Tours and Wuestion Mark Press for inviting me onto Jane Braddock's Comatose Blog Tour, It is indeed a privilege

But first, here's the blurb 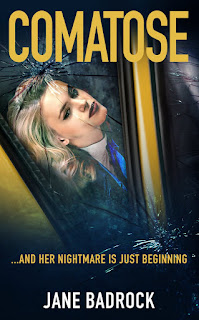 ...and her nightmare is just beginning.

Newly promoted DS Karen Thorpe is determined to prove these are no accidents. But the only witness is in a coma.

Now there's a rapist on the loose.

Karen's in the fight of her life... and her boss isn't on her side.

All about Jane Badrock

Comatose is a twisty crime story but where it's a bit unusual is that alongside DS Karen Thorpe, who is trying to solve the case, you also hear from the comatose victim, Stella as she makes her own journey back to wakefulness.

I was inspired to write it after I was driving and managed to avoid an accident when a car which cut in front of me braked suddenly. I just started thinking 'what if…' and before I'd got to my destination, I had the rough outline.

I started writing it back in 2013. I was still working full time and had masses to do with our money-pit of a house, so it wasn't a priority. I kept on at it, alongside others I wanted to write, eventually getting it into a fairly decent shape in 2019. Then I polished it up this year.

I'd like an unknown actress to play Karen. Something that might kickstart her career. In the story, Karen is finding her way so I think an actress in a similar position would be perfect.

None of the characters are based on real life people, but I have drawn on people I've met over the years for inspiration. One set of my grandparents lived in Manchester and I lived in Chesterfield when I was young. The name Cary comes from the bride-to-be my husband and I met on holiday. Shen and her groom They needed witnesses for their marriage, so we stepped in.

When I get an idea, I have no idea where it's going to go. I have written a few novels for Nanowrimo, but Comatose wasn't one of them. I expect the practice of writing 50,000 words in a month probably sketched it out in my brain as something to aim for.

I'm fond of two of them in particular. Macy Dodds and John Steele who effectively become Karen's sidekicks. 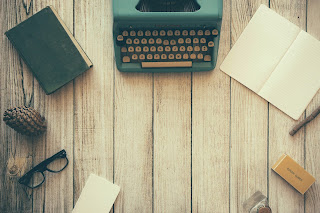 I have just taken over my husband's study which is much bigger than the tiny room I
used to have and I'm loving it.

I sometimes find excuses not to go into my study, but when I do, the words almost always come.

My routine used to be very regular. I would spend at least an hour every evening before having a bath and cooking tea. More recently, circumstances have changed and it's all over the place!

Writing is actually much harder than it at first appears. If it really is your heart's desire you have to have a hide like a rhino, listen to all the advice others will give you and most importantly stick at it. Writers will often get their breakthrough from the most unexpected routes. I'd also say that being formally published is not the holy grail it used to be. There are plenty of authors using independent routes these days.

Writing 100 word stories is always fun. I've also written short stories by getting people on like to give me a page number and line number from a book, then taking the first whole sentence as an opening sentence.

I don't wish I'd written anyone else's book. I'm happy to admire them and hope that one day readers will take my books to their hearts.

Author as a Person 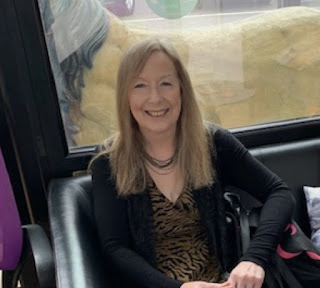 I have no idea what readers know about, or think of me! Quite a few know I write poems! There's nothing else I want to do now other than write and paint and  I like puzzles.

ATM I'm trying to read some classic 19th and 20th century novels. I'm on 'Of Human Bondage' at the moment but haven't had time to read anything in ages!

I don't do dinner parties. I'm more a 'get drunk at the bar' kind of gal! I've been lucky to do just that with lots of very interesting people over the years.

I'm compelled to write. Once the idea comes, it's my mission to make it into the best and most engaging story I can.

My next project is The Ice Maiden. Why is Maddie's life threatened?

Maddie's having dreams and visions and begins to realise she's being threatened. She's often shaken awake by her flatmate. One day she's woken by the smell of petrol and burning and the sounds of broken glass….

Jane writes novels, short stories and poems, usually with a good dose of humour in them. She's probably owes it all to her late grandmother who, she's just found out, also wrote short stories and poems. She tends to get an idea and then run with it whether it be a 100 word short story or an 80 thousand word novel. It all depends on the voices in her head at the time…