Showing posts from April, 2020
Show All

Book Review: A Conspiracy of Bones by Kathy Reichs

It's been a while since I read a Temp Brennan novel, but  despite the fact that things have changed for Tempe, I found it ridiculously easy to pick things up. There was a time, a few years ago, when I read this series and no sooner finished one than I was looking out for the next one - I've no idea why that stopped - probably found another author to get addicted to. However, I'm pleased I reacquainted myself with Brennan and her entourage.

Here's the Blurb
EVERY BODY HAS SECRETS

It’s sweltering in Charlotte, North Carolina, and Temperance Brennan, still recovering from neurosurgery following an aneurysm, is battling nightmares, migraines, and what she thinks might be hallucinations when she receives a series of mysterious text messages, each containing a new picture of a corpse that is missing its face and hands. Immediately, she’s anxious to know who the dead man is, and why the images were sent to her.

My Life of Crime with crime author Dave Sivers

Dave Sivers grew up in West London and has been writing all his life. His books include the popular crime series featuring the Aylesbury Vale detectives, DI Lizzie Archer and DS Dan Baines. The Scars Beneath the Soul and Dead in Deep Water were both top three bestsellers in the Amazon Kindle Serial Killers chart. His next novel, In Ink, introducing DI Nathan Quarrel, will be published on 15 May. Dave lives in Buckinghamshire with his wife, Chris, and is a founder of the annual BeaconLit festival of books and writing. Over to you Dave.

Two books that influenced me. The Lion, the Witch and the Wardrobe by C S Lewis. I inherited love of story from my mum and quickly realised that primary school ‘compositions’ could be used as an excuse to make my own stories – so I’ve honestly been writing since age six. But it was around that age that a teacher called Miss Jones introduced us to Narnia by reading us a chapter a day. Stephen King talks of the ‘hole in the page’ that a writer dives through i…
Post a comment
Read more

Book Review: The Boy From The Woods by Harlan Coben

The Boy From The Woods welcomes some new characters, whilst treating us with the presence of the brilliant fiesty Hester Crimstein, from the Myron Bolitar novels. Wilde is enigmatic, self sufficient and a little remote ... but then if you'd been found as a feral child roaming the woods and fending for yourself maybe you would be too.


Thirty years ago, a child was found in the New Jersey backwoods. He had been living a feral existence, with no memory of how he got there or even who he is. Everyone just calls him Wilde. Now a former soldier and security expert, he lives off the grid, shunned by the community – until they need him. A child has gone missing. With her family suspecting she’s just playing a disappearing game, nobody seems concerned except for criminal attorney Hester Crimstein. She contacts Wilde, asking him to use his unique skills to find the girl. But even he can find no trace of her. One day passes, then a second, then a third. On the fourth, a human …
Post a comment
Read more

A Word from the Author: Malcolm Hollingdrake author of the Harrogate series. 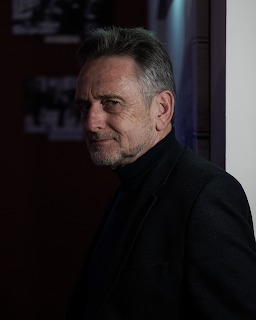 The term truth can be stranger than fiction has never been more real than today when we know the position in which we now find ourselves. It is clearly a position of uncertainty and with that comes a degree of anxiety, whether that be for ourselves, our loved ones or our communities. They are unprecedented times. What I have realised is that as a country we seem to come together during times of adversity; a human spirit is rekindled and we suddenly begin to look out for others – kindness comes to the fore. Even in the simplest of forms – my banging a pan on a Thursday evening at eight is as much for my well-being as for saying thank you to the many key workers. It helps me belong and feel a part of a missing community when in isolation. We also see amazing achievements. Who would have thought that a ninety-nine year old, a tank commander in WW2, would again show true grit and leadership in a way that was not only humbling but inspiring; for here is a man who has innocently lifted the h…
Post a comment
Read more

I love David Baldacci's Amos Decker character. Such a unique slant on characterisation and now that we're onto the sixth book in the series it pleases me to see that Baldacci has been able to evolve Decker's character in new and exciting ways. In Walk The Wire, Decker and Alex Jamieson are sent on a mission but given no guidelines to follow or told exactly what their mission is ...


Here's The Blurb
Remember his name: FBI Agent Amos Decker is back in a brand new thrilling memory man investigation from number 1 bestseller, David Baldacci. A town with a secret. A lone hunter discovers the remains of a woman in North Dakota’s Badlands. She appears to have had a post-mortem performed on her reminiscent of those only seen on TV shows – but this time, there was no slab, morgue or camera in sight. A victim without a past. The reason why Irene Cramer’s death merits an FBI investigation becomes rapidly clear when key questions surface about her mysterious past. Little is known about t…
Post a comment
Read more

Can you believe we're onto the 20th Women's Murder Club novel by James Patterson, featuring cop Lyndsay Boxer, Medical examiner Claire Washbourn, defence attorney Yuki Castellano and star reporter Cyndi Thomas?
Well I can because Patterson is one of the most prolific writers around and is noted for teaming up with other writers to produce his series books.  So what did this twentieth outing of the incredible quartet have to offer?


The Women's Murder Club face the fight of their lives in the latest thriller from the bestselling James Patterson series THREE CITIES. THREE BULLETS. THREE VICTIMS.Simultaneous murders hit LA, Chicago and San Francisco. SFPD Sergeant Lindsay Boxer is tasked with uncovering what links these precise and calculated killings. Lindsay discovers that the victims all excel in lucrative, criminal activity. As the casualty list expands, fear and fascination with this shocking spree provoke debate across the country. Are the killers villai…
Post a comment
Read more

My Guilty Pleasures on The Crime Warp: The Gina Harte novels by Carla Kovach 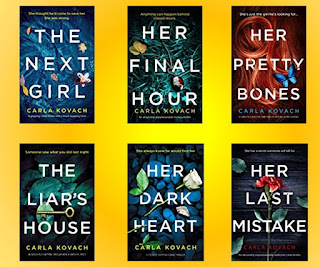 I love reading a series of books. Something just appeals to me about finding out more and more about the characters as the series progresses, which is why I tend to binge read a series when I find one I love. Today's Guilty Pleasures are Carla Kovach's books.

Apart from being a very talented author, Carla Kovach is also an extremely talented artist. But today, the Kovach creations we are looking at are her phenomonal Detective Gina Harte novels. I have to admit, the first of Carla's novels I read was Her Pretty Bones, which I got from Netgalley. I soon realised that I wanted to find out more about this intriguing character and ... well the rest is history; I went on a Gina Harte binge and am here today to tell you all about these books which I then went back and read in order.

I think what I love most about these books is that they raise really fresh and interesting questions. Harte herself isn't your typical detective and that appeals top me. She's a mother, tryin…
Post a comment
Read more

Book Review: Spring is here, so maybe for Bank holiday weekend, M.C. Beaton's Agatha Raisin book, Beating About the Bush, might be a relaxing Easter choice

M.C. Beaton was a delight. In interview she came across as humerous, fiesty, intelligent and just a little bit risque. Her creation Agatha Raisin and the complete cast of Cotswolds characters have been a delight to read and Beating About the Bush is no exception. Would you believe that this is the 30th Agatha Raisin book and what a whopper it is.

When private detective Agatha Raisin comes across a severed leg in a roadside hedge, it looks like she is about to become involved in a particularly gruesome murder. Looks, however, can be deceiving, as Agatha discovers when she is employed to investigate a case of industrial espionage at a factory where nothing is quite what it seems. The factory mystery soon turns to murder and a bad-tempered donkey turns Agatha into a national celebrity, before bringing her ridicule and shame. To add to her woes, Agatha finds herself grappling with growing feelings for her friend and occasional lover, Sir Charles Fraith. Then, as a possi…
Post a comment
Read more
More posts