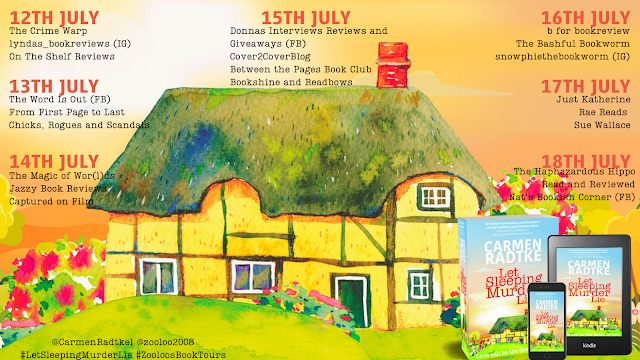 Huge thanks to Zooloo's book tours for inviting me to host this extract from cosy crime novel Let Sleeping Murder Lie by my friend  Carmen Radtke. It's great to be kicking off this blog tour. Hope you enjoy this sneaky peek... 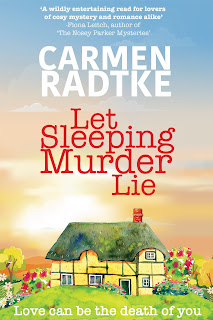 American Eve Holdsworth is living her quintessential English dream in a picturesque village in the countryside. Meeting an attractive stranger adds to the appeal.

But Ben Dryden is a pariah in Eve’s new neighbourhood, since his wife was murdered five years ago, and he was the only suspect.

Eve, who is absolutely sure someone as charming as Ben could never be a killer, is

determined to solve the case and clear Ben’s name, even if it’s against his will.

Soon enough Eve finds herself in deep waters, and with her life at stake, she can only pray that her romantic notions won’t be the end of her …

Had a good day?” Hayley set down pot and cup, and a china cow with milk.
Eve showed her the binoculars. “I’ve taken up bird-watching.”
“There’s a group you could join if that floats your boat.” Hayley shuddered. “They’re
constantly searching for new blood, and believe me, that’s not simply a turn of phrase.
Marching for miles at the crack of dawn, through mud and thistles, and when you can’t tell one bloody warbler from another, they’ll tear you apart.” She gave the gleaming counter a quick wipe. “Still, it’s a nice hobby I suppose.”
“I’m not much of a joiner.” Eve stirred her tea. “I just prefer to have a purpose when I
go for a longer walk. Otherwise I’ll slack off after a week or so.”
The discussion at the back ended with one of the women, a septuagenarian with a
mass of flame-coloured hair pouring out from under a woollen hat, taking up the darts. Her lack of aim was only equalled by the force of her throws. The dart-tips penetrated the wall left of the board. Pockmarks in the plaster led Eve to think it was a regular occurrence. The discussion started anew.
“That’s a pity,” Hayley said. “They always look for reinforcements at our local am-
dram. Our donkey’s ass moved away, and that could be the end of the group.”
Eve’s blank stare elicited a chortle from Hayley.
“We do nothing but the panto each year. It’s good fun.”
Eve lied, “I’ll think about it.”
The dart game got heated. Hayley ignored it.
“Do you know anything about a cabin in the woods? I was told it’s got a bad
reputation,” Eve said.
Hayley dropped her polishing cloth. “What cabin?”
“A little place, about two or three miles further down the stream?”
“How did you hear that?”
Eve added an unnecessary splash of milk to her tea and stirred it again. “A guy I met
mentioned it. Tanned, blonde, thirty-something. His name was …”
“Ben Dryden.”
“Yes.” Eve didn’t know why she was surprised. Bartenders knew everything, and
everyone.
Hayley picked up her cloth. “The place has a bad reputation alright, as does the rest of
the property. And the owner.”
“But why?” Eve asked.
“A woman was murdered there five years ago. No conviction, but ask most people
here, and they will swear to one thing. It was Ben who killed his wife.” 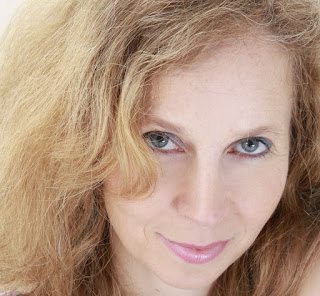 Carmen Radtke has spent most of her life with ink on her fingers and a dangerously
high pile of books and newspapers by her side.

She has worked as a newspaper reporter on two continents and always dreamt of becoming a novelist and screenwriter.

When she found herself crouched under her dining table, typing away on a novel between two earthquakes in Christchurch, New Zealand, she realised she was hooked for life.

When Carmen is not writing cozy mysteries, reading or dreaming of travel, she is busy acting as resident cat servant or tap-dancing (badly, but enthusiastic).

She is currently working on her next Jack and Frances mystery.