Author Interview with Kia Abdullah who has taken the crime fiction world by storm after her wonderful courtroom thriller with a twist, Take It Back, hit the shelves. 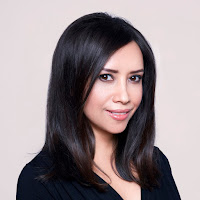 When I heard Kia talking about her novel, Take It Back, at Bradford Literature Festival back in July, I just knew I had to read it … my review will be posted in a few days (heads up it’s brill), but I also knew that I wanted to do an author interview with Kia for The Crime Warp and lucky us, she graciously agreed. So cracking right on. Please welcome Kia Abdullah to the blog …

Tell us a bit about Take It Back

Take It Back is a courtroom drama in which a 16-year-old girl called Jodie accuses four classmates of rape. Jodie is white and the four boys are from Pakistani and Bangladeshi backgrounds, so this immediately draws the attention of the press and the public.
Former barrister Zara Kaleel takes up Jodie’s case and together they enter the most explosive criminal trial of the year, exposing ugly divisions within British society.


I want the reader to not only decide if the accused are guilty but also to question how we judge people based on what they look like or what they believe in. 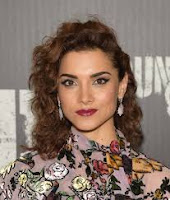 If Take It Back was ever to be televised or made into a film who would you like to play your main character and why?

I think Amber Rose Revah who plays Dina Madani in The Punisher would be an amazing Zara. I first thought so when watching her as Dina and later found out that she was British, which is perfect! Amber seems able to perfectly balance strength and courage with a touch of vulnerability, which is how I see Zara.


I’m not yet sure about Jodie. There is so much British talent out there though and I’m sure we could find someone fantastic.

Are any of your characters based on real life people?

I would say about 60% of my writing is based on personal experiences. In Take It Back, that manifests in Zara’s relationship with her mother and her family and the way in which she struggles with the expectations of her community: to dress a certain way, to behave a certain way. These are things I’ve also struggled with.


There are broader themes I’ve taken from real life too: faith-based tribalism, mob mentality, the media’s treatment of people based on their race, faith or gender. These are all things I’ve witnessed in life.

Do you ever suffer from writer’s block and if so how do you overcome it?

I certainly have good stretches and bad, but I write through the bad ones. It’s strange because after Take It Back, I sat down and the first thing I thought was I’ve forgotten how to write a novel.


David Nicholls, the author of the 5m-selling One Day, recently said that it doesn't get easier with each book and that he doesn’t feel any more confident now than when he started, so perhaps writers forever teeter on a precipice of doubt. You have to write through it and go back and polish and polish and polish. That’s what I do when I suffer writer’s block.

One of the most heartening things I ever heard was from Ira Glass on the subject of taste. He explains that your work will disappoint you for the first few years of your career because you’re falling short of your impeccable taste. So many writers quit before they break through that wall. The ones who make it are the ones who keep going. If you’re an aspiring writer, do listen to the quote in full.

I think that’s so true, Kia. Is there a particular book you wish you’d written and why?

The Secret History by Donna Tartt is just delectable. The writing is exquisite, but not at the expense of plot. I think she’s one of the greatest talents of our time and I’d have no qualms about putting my name to her books. (Either that or Fifty Shades of Grey because dollars.)

My ‘day job’ so to speak is running an outdoor travel blog called Atlas & Boots, which means I’m frequently on the road. I’ve been to about 60 countries including places like Vanuatu, Tonga, Djibouti, Lesotho and Swaziland. For a long time, I wanted to try living abroad but I’ve realised that there really is no place like home. I’d miss the British sense of humour and our tendency to self-deprecate.

The second thing that readers may not know about me is that I can code. My degree was in Computer Science and while I can’t do anything complicated now, I once built a tool for debugging Java programs. It’s probably the hardest thing I’ve done from a cerebral point of view.

God, I’d love to work for the European Space Agency or NASA. Sadly, I was never very good at physics but what a job!

Which author are you cosying up with tonight?

I’m reading My Dark Vanessa by Kate Elizabeth Russell. I kept hearing that it would be one of the biggest novels of 2020 so I cheekily tweeted the publisher asking for an early copy and they sent me one! It is very good so far.

Could you describe the book you are working on at the moment using only 5 words?

The grey spaces between consent.

Oooh, that’s a deliciously interesting 5-word description, Kia. Do you have competing ideas for future projects and have you ever worked on more than one at the same time?

Yes. I had two ideas for my next novel and decided on which to pursue with the help of my brilliant editor. Sadly, I can’t multi-task when it comes to books. I know some authors who find pure joy in the act of writing fiction. I met one recently who said she wrote a book outside her genre purely as a hobby. I’m not like that at all. I need to focus on one idea and even then it’s not easy. Of course, it’s all worth it when you hold your finished book. 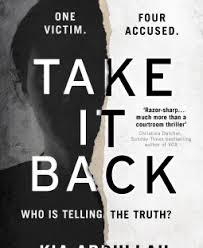 Author bio: Kia Abdullah is an author and travel writer from London. She has written for The Guardian, The New York Times, the BBC and Lonely Planet, and is the founding editor of outdoor travel blog Atlas & Boots read by 250,000 people a month. Kia's novel, Take It Back, is published by HarperCollins

Take it Back is available here:Amazon Link