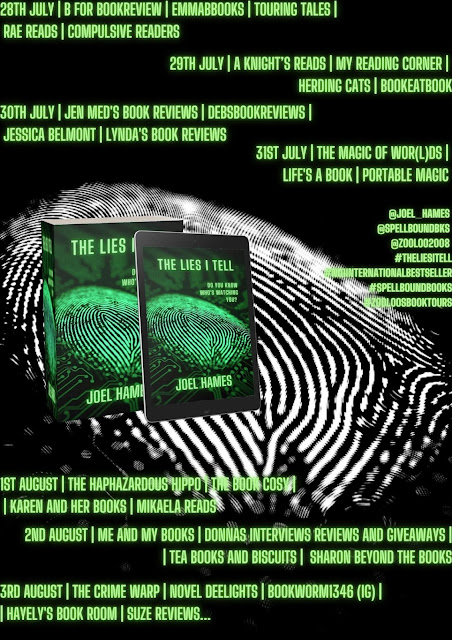 What a delight to be chatting to the delightful Joel Hames author of The Lies I Tell. Thanks so much to Spellbound books and Zooloos Book Tours for the invite to the Blog Tour with a wonderful Q&A.  But First, here's the blurb ... 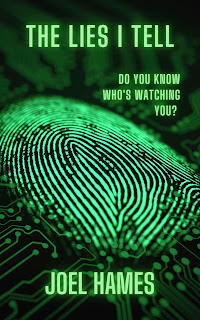 BUT WHO’S WATCHING HER?

From the bestselling author of Dead North, a tense, claustrophobic psychological thriller perfect for fans of Lucy Foley, Claire McGowan and Clare Mackintosh.

My name is Lisa and I’m an identity thief. If I’m not inside your system stealing your money, I’ve probably already stolen it. I’m your friend. I’m a thief. I’m gone. I’m in control.

Only now, the tables have been turned. I’m in danger. My son is in danger. And I don’t know where that danger’s coming from.

Any friend.
Any enemy.
Any stranger.
Anyone from the past I’ve been trying to outrun for years.

NOBODY CAN BE TRUSTED.

Tell us a bit about your current book release.

The Lies I Tell was published by SpellBound in February, and it’s a book that’s very close to my heart. It’s the story of Lisa, an identity thief who seems, at first, to have no conscience and little sympathy for her victims. But as her history is gradually revealed, and it becomes clear that she’s been shaped by events outside her control, her present-day life takes a shocking twist: someone’s figured out who Lisa is. With the police at her door and a dead body in the mix, Lisa needs to re-examine her past if she’s to find out who’s tormenting her, and why, and protect herself and her young son.

Where did the inspiration for The Lies I Tell come from?

Oh, a number of places. I think the idea of the tables being turned on a central character who seems to be in control is a really appealing one – it enables the reader to see, at first, the façade that character wants to present, and then strips it away as power descends into helplessness and their true nature is revealed. In that sense, it’s influenced by books like Norman Mailer’s Tough Guys Don’t Dance and Iain Banks’ Complicity, with two key differences: the central characters in both those books are already somewhat out of control before the events begin, whereas Lisa’s apparent security is only revealed as built on shifting sands as her story unfolds; and unlike Lisa, they’re both male, and even as a male author who’s written male protagonists more often than not, I’ve had enough of being made to feel sympathetic towards men diving headlong into what looks a lot like an exaggerated, plot-driven mid-life crisis. So even if the plot structure is influenced by those novels, I like to think of Lisa herself as a product of more modern novels – akin to Mary from Helen Fitzgerald’s Worst Case Scenario, or even Rachel from S E Lynes’ Can You See Her?

Plotwise, my wife and a number of friends have all fallen victim to identity frauds of the various types described in the book, too, so I didn’t have far to look for source material!

How long did The Lies I Tell take to write

Where is your favourite place to write and why?

The year before last I did some writing on a Cornish beach while my wife and daughters surfed. Sounds lovely but I wouldn’t recommend it. Sand and glare are a bad combination. So no, I like to write in the study I share with my wife, until she gets on a Zoom call and kicks me out, at least.

Is there a particular book you wish you’d written and why?

Commercially, and rather obviously, I wish I’d written Harry Potter and the Philosopher’s Stone, because then I could have my very own Cornish beach to write on, and I’d probably be able to replace the sand with something less annoying. Also, it would be in the Caribbean rather than Cornwall.

From a literary perspective, I’d like to have written Never Let Me Go, because it’s pretty much perfect in every way, right down to the fact that some people, strangely, just can’t get on with it. If I’d written Never Let Me Go I’m convinced I’d never write again, because there wouldn’t be any point, and I’m constantly amazed by the fact that Ishiguro’s carried on writing.

Author as a Person

Two? I’ll give you three. I’m pretty much blind in one eye, I’m an MMA black belt, and I once played Wembley (Wembley Conference Centre, that is. Still, 3,500 in the audience, so not bad going.)

Musician/songwriter or professional crossword setter, both of which I can do, but in neither case to the level necessary to make an actual living out of it.

Which author are you cosying up with tonight?

Three books: on my Kindle I’m reading Louise Beech’s wonderful This Is How We Are Human, a powerful novel about the decisions the mother of an autistic twenty-year-old boy is forced to make; in paperback I’m reading Carlo Rovelli’s Helgoland, about how Heisenberg et al developed quantum mechanics in the early years of the twentieth century; and on audio I’m listening to Gillian Flynn’s Gone Girl, which I should have read years ago, stupidly avoided because I like to steer clear of hype, but am absolutely loving now.

Could you describe the book you are working on at the moment using only 5 words?

The book is the third in a new series, the first of which will be called Dead Dogs Don’t Bark, and all three are best summed up in the words Sergeant Zebedee is *!^$ing weird

Have you ever thought of setting a book somewhere exotic so you could visit that place or perhaps live there for a while? Where would that / will that be?

Hah! That’s a great idea. No. In fact, it’s been the opposite: I come up with locations that fit the scenes I want to describe, and then, if I don’t know them well, I have to scope them out, but they’re never exotic! Orford Ness is the setting for the climactic scene in The Lies I Tell, and it’s desolate and windswept and atmospheric, but it’s Suffolk, not San Francisco. I’ve used a fictionalised version of where I currently live for bits of the Sam Williams books and the new Zebedee series, as well as London and Manchester, which I know very well indeed, and also parts of Argentina, but places in Argentina I’m already familiar with. The only place that might really count as exotic in any of my books is the African setting for the second half of The Art of Staying Dead. Just two problems in terms of visiting: it’s (a) riven by civil war and (b) completely fictional.

But you’ve got me thinking, now, and I’m this close to plotting out a sequel to The Lies I Tell in which Lisa is “forced” to spend a fortnight in Costa Rica, poor thing…

Thanks so much for having me on today, I really appreciate it and I hope I’ve been sufficiently interesting not to lose you readers in droves! 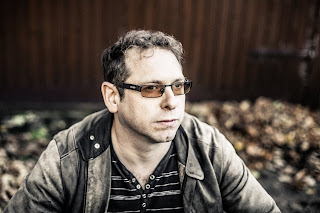 A Londoner in exile, Joel Hames lives in rural Lancashire with his wife and two daughters.

His works of fiction include the bestselling Sam Williams trilogy Dead North, No One Will Hear and The Cold Years, and the standalone psychological thriller The Lies I Tell.

When not writing or spending time with his family, Joel likes to eat, cook, play the piano, and make up excuses to avoid walking the dog. There’s the MMA thing, too, but he doesn’t like to show off.