My Life of Crime with crime author Dave Sivers

Dave Sivers grew up in West London and has been writing all his life. His books include the popular crime series featuring the Aylesbury Vale detectives, DI Lizzie Archer and DS Dan Baines. The Scars Beneath the Soul and Dead in Deep Water were both top three bestsellers in the Amazon Kindle Serial Killers chart. His next novel, In Ink, introducing DI Nathan Quarrel, will be published on 15 May. Dave lives in Buckinghamshire with his wife, Chris, and is a founder of the annual BeaconLit festival of books and writing. Over to you Dave.

Two books that influenced me.
The Lion, the Witch and the Wardrobe by C S Lewis.
I inherited love of story from my mum and quickly realised that primary school ‘compositions’ could be used as an excuse to make my own stories – so I’ve honestly been writing since age six. But it was around that age that a teacher called Miss Jones introduced us to Narnia by reading us a chapter a day. Stephen King talks of the ‘hole in the page’ that a writer dives through into the world of the book, but it works for readers, too. That was the first book which truly opened that hole for me and pulled me in. 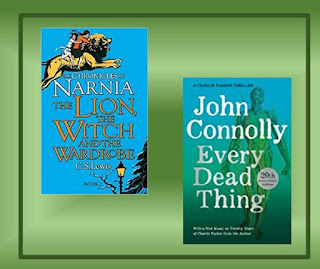 Every Dead Thing by John Connolly.
I’ve always thought John Connolly and Stephen King have a lot in common. They’re not easy to pigeon hole. Both have elements of supernatural in much of their work, but there’s a lot more to it than that. King is usually on the horror shelves, while Connolly is usually in crime, probably because his series character, Charlie Parker, is a private eye. This first Parker book is for me a masterclass in writing a crime thriller. I immediately read it, making notes on the structure so I could see what the author had done and how he’d done it. It’s the book that first opened my eyes to story structure in quite that way.
Two Songs that influenced me.
4th of July, Asbury Park (Sandy) by Bruce Springsteen.
The Boss is such a brilliant songwriter, never more so than when he tells a story in such a way that you can almost see the movie playing inside your head. I especially love the live version of this song about leaving an old life behind. Some think it’s a metaphpr for Springsteen himself ;looking back on how fame has changed him. I see it more as a coming of age thing. It probably offers different meanings for everyone. It’s a song you can go back to and find new nuances in, and it has killer lines like, ‘Did you hear the cops finally busted Madam Marie for tellin' fortunes better than they do?’

The Age of Miracles by Mary Chapin Carpenter
I love just about every song this woman has written, and I could have chosen hundreds of them. She’s currently lifting our spirits online with songs from her kitchen. This is a song of despair over making the same mistakes over again and finding hope in witnessing small acts of courage and defiance. It’s both moving and uplifting. Maybe just what we need in the current crisis.
Two Films/TV Dramas, documentaries or similar that influenced me and why
The West Wing.
Seven seasons, 156 episodes, and simply the best TV ever. And I say it as someone who keeps going back and watching the whole thing through. Aaron Sorkin’s ensemble drama, with it’s sweeping grand design, big stories, slow burn stories, and also the little stories self-contained within a single episode is a simply brilliant construct, carried along by a pitch-perfect cast inhabiting credible characters with strengths and flaws. The relationships between the characters are brilliantly observed – the love, the irritations, the disappointments. And if all that’s not enough, look at the sequences where the action is in perfect tune and time with the music: for an example, go to YouTube and find the military funeral of a homeless man while ‘Little Drummer Boy’ plays over it. The quality of the writing is so good, it makes me weep, but that sort of quality should also be the Holy Grail for a writer. 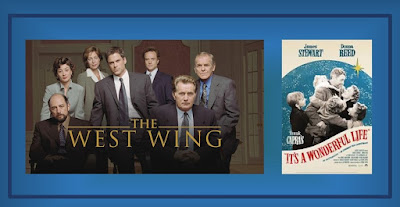 It’s a Wonderful Life
The best film ever for me, and many others’ favourite too. The device is simple: a man pushed to the edge contemplates suicide until an angel shows him a vision of what the world would be like if he’d never existed – and it’s a dark place indeed. When he returns home, realising that life really is wonderful, he finds how loved he is, and everyone has rallied round to help him. So far, so schmaltzy. But of course, the best films are about the observation and the characters. James Stewart plays George Bailey with such conviction and compassion that you can’t help rooting for him. It makes me cry no matter how often I see it. The first minutes bring a lump to my throat. Call me a softie – and most people do – but any writer can learn from films like this how to invoke powerful emotions, time and again.
Two People who influenced me
Nelson Mandela.
Great men and women are rare enough but, of all that rare breed, it’s hard for me to think of anyone else quite so extraordinary from my lifetime. A man who spent 27 years in prison for his struggle against South Africa’s apartheid regime and, following his release in 1990, worked with the President F W de Klerk  to negotiate an end to apartheid. Their efforts led to the 1994 multiracial general election in which Mandela led the ANC to victory. In his five years as president, he led a broad coalition government,  which promulgated a new constitution, and he focused on reconciliation between the country's racial groups and created the Truth and Reconciliation Commission to investigate past human rights abuses. He by no means solved all his country’s problems at a stroke, but his achievements, through the strength of his own personality, are staggering. Watch the film ‘Invictus’ in which Mandela, played brilliantly by Morgan Freeman, manages to rally black South Africa behind the national Springboks rugby team, previously a hated symbol of white supremacy, and inspires the team to win the 1995 World Cup.  When Mandela wore a Springbok shirt at the final and presented the trophy to captain Francois Pienaar, an Afrikaner, it was seen as a major step toward reconciliation and won the hearts of millions of white rugby fans. 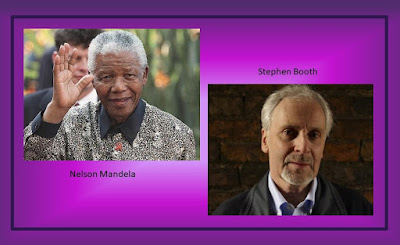 Stephen Booth.
These are such hard questions, but taking the ‘influence’ thing literally, this Derbyshire crime writer deserves a mention. When I first started trying to write crime, I used to go to a lot of festivals, especially Harrogate Crime. I knew I wanted to write authentic crime set in my beloved Chilterns, but a panel discussion on Town vs Country settings seemed to be saying that if I wanted to wrote gritty crime I should go for a big, urban city setting; rural would condemn me to cosy crime with old ladies, hats and cats – or something like Midsomer Murders. But I also saw Stephen Booth talking about his Cooper and Fry series: it’s set in rural Derbyshire, but is as gritty and uncompromising as they come. It gave me the courage to stick to my guns, and I’m glad I did. Stephen is also a seriously nice guy.

Dave's next book, IN INK  is available in paperback and Kindle ebook on 15 June 2020:
The Blurb
A cruel death. A macabre calling card.
A killer on a mission.
A body is found outside a church in a small Hertfordshire town. Alastair Murdoch suffered before he died. But what really disturbs DI Nathan Quarrel is the Tarot card motif adorning the body: The Fool.
Just 24 hours later, another body turns up.
A different card, but from the same pack.
Unless Quarrel can decipher the meaning behind the cards and the connection between the victims, more will follow in a twisted agenda of abduction, pain and death.
PRAISE FOR DAVE SIVERS:
‘Fabulous stuff – as good as Peter Robinson’ – Christina Jones, bestselling author
‘Sivers is alongside the likes of McDermid and Billingham in terms of giving you characters you just long to know more about’ – Robert F Barker, author of the Jamie Carver series.
www.davesivers.co.uk
Facebook: davesiversauthor1
Twitter: @davesivers


Liz Mistry My Life of Crime