My Life of Crime: Tony Forder author of the amazing Bliss series. 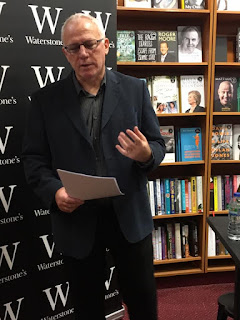 It is with great delight that I welcome Tony Forder to The Crime Warp. Over to Tony....

First of all, Liz, I’d like to thank you for the opportunity. I love this feature on your blog, and I’m honoured to be featuring on it now.

Tony J Forder is the author of the critically acclaimed, international best-selling crime thriller series featuring detectives Jimmy Bliss and Penny Chandler. The first three books, Bad to the Bone, The Scent of Guilt, and If Fear Wins, are now joined by The Reach of Shadows, published in January 2019. The fifth book in the series, The Death of Justice, has now been commissioned and will be published on 9 September.

Tony’s dark, psychological crime thriller, Degrees of Darkness, featuring ex-detective Frank Rogers, was also published by Bloodhound Books. This is a stand-alone serial-killer novel. Another book that was written as a stand-alone was Scream Blue Murder. This was published in November 2017, and received praise from many, including fellow authors Mason Cross, Matt Hilton and Anita Waller. Before it had even been published, Tony had decided to write a sequel, and Cold Winter Sun was published in November 2018.

Tony lives with his wife in Peterborough, UK, and is now a full-time author. He is currently editing a new novel, and has also started on Bliss #6. 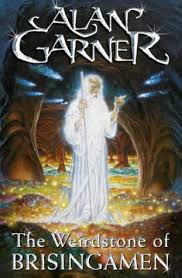 Two Books That Influenced Me
I have to begin with The Weirdstone of Brisingamen, by Alan Garner. I read it at some point before I hit my teenage years, and its impact could not have been greater. An avid reader, I had already scribbled a few stories down when I came upon this book. It was not only a wonderful novel – a sort of Lord of the Rings-Lite – but it was the first work of fantasy I’d read, and it was as if I’d been provided with a key to unlock my own imagination. It occurred to me that I didn’t have to write about the known, that in fact I could simply invent. It was the book that began my long journey as a writer. I went on to write fantasy tales by the dozen. 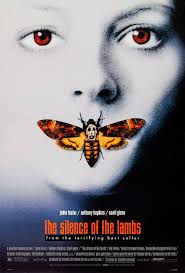 The Silence of the Lambs
Although I had absolutely loved Thomas Harris’s previous novel, Red Dragon, this became – and remains to this day – my absolute favourite book. Of course there was the impossibly wonderful development of Hannibal Lecter, and the magnificent creation of Buffalo Bill, but trainee FBI Agent Clarice Starling was such an amazing character as well. However, for me, it wasn’t just the storyline, nor those stunning characters, but the writing itself that did it for me. Razor sharp prose and dialogue, nothing extraneous, just finely-honed craftsmanship. I was already into crime and thrillers long before Red Dragon, but it was this book that somehow brought everything together in one package which for me at least has never been surpassed.


Two Songs That Influenced Me
Waterloo Sunset – The Kinks. This was the first record I ever bought with my own money. I was ten. I liked the Beatles and Stones, but there was something about The Kinks that just did it for me. I not only loved the song, but also the story told here about Terry and Julie, and it resonated with me in a way no song had before. It changed my life in a positive way, because it made me all the more determined to both play guitar and compose songs, both of which I did, playing in a few bands and writing my own stuff to add to the setlist. I play only for fun and to keep my fingers loose these days, but it has brought me a great deal of joy down the years.

Rosanna – Toto. This song had a powerful impact on me in terms of song creation and structure, musicianship and production. The craft and skill involved in every single aspect of this song still gives me chills even today, especially when they play it live. I realise in choosing this that I’ve left out great tracks by other favourites such as The Small Faces, Steely Dan, Squeeze and many, many others. But this is about influence, and this made me a better musician and songwriter, and I think a better appreciator of music in general.

Two Dramatisations  That Influenced Me
Oh, so spoiled for choice!! Breaks my heart to narrow it to two, and someone recently went for Bosch which would have been one of my picks, so I’m going to go with: 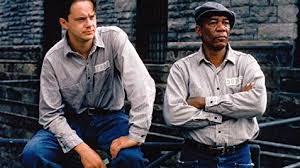 The Shawshank Redemption, based on the Stephen Kink novella. Once you get beyond the crime, the injustice, the pain and the misery of incarceration, what you’re left with is a story about what freedom means to some. One of the main characters gets paroled and can’t cope with being back in the world because he became institutionalised. The main character, however, was last seen in a wide-angle shot revealing the wide open spaces of a beach in Mexico, revealing the true power of freedom and how to make the most of it. Brilliantly acted, this is my favourite film and I find myself feeling uplifted and inspired by it every single time I watch it. 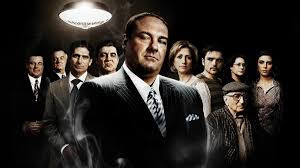 The Sopranos, for me, is the best example of what TV can deliver. Its wry observation of family within The Family could be excruciatingly funny, horrifying, chilling, touching, creepy, annoying, emotional and mind-boggling all within a single show. The loyalty and betrayal featured across the breadth of the entire batch of seasons took viewers to its extremes, and at times it was impossible to know who to root for. But both the acting and scripts were spot on, albeit occasionally self-indulgent, and I always felt on edge not knowing what might happen next. If you remember the famous Joe Pesci scene from Goodfellas, where he becomes enraged by someone he believed was laughing at him rather than with him, that was how so many scenes in every single episode of The Sopranos felt. A masterpiece of storytelling. 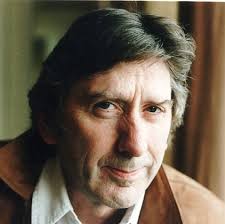 James Herbert. Why? Because until I discovered who and what the horror author was, it never occurred to me that people might actually take my writing seriously. Growing up in the east-end of London and in rough neighbourhoods, I believed for a long time that authors of the day were highly educated people born into influence. It blew me away when I read that James Herbert was from virtually the same neighbourhood as me, with a similar working class background, and that he’d even gone into advertising just as I did when leaving school – albeit I was an illustrator. Then I also learned that he drew and played the guitar, and I saw so many similarities that it dawned on me that I might also find a market for my stories.

My wife – Ei. Why? Because when I was about to be made redundant from my long-term job a few years back, rather than discuss what other job I might start looking for her first words to me were, “Why don’t you start taking your writing seriously again? Why don’t you just take time out and write?” It was amazingly generous of her, and that her first thought was not about money or security but for someone else came as no surprise. I might well have tinkered around the edges without her suggestion, always backed up by support, but I doubt that I would have thrown myself into it so fully without her encouragement. So I did start taking it seriously again, and I did take time out to write. I dusted off the two books I’d written and offered them up for submission. I was made redundant on 31 December 2016, and signed my first ever book contract on 1 February 2017. What’s happened since has been far, far beyond my wildest expectations, and I am living the dream right now thanks to her.

That’s it, then. Once again, thank you so much for allowing me space on your wonderful site. 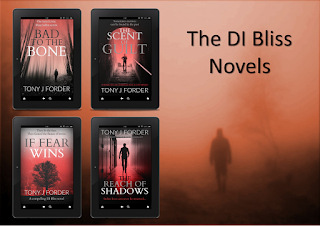 Detective Inspector Jimmy Bliss first appears in the 2017 book Bad to the Bone, in which a skeletal body uncovered in local woodland leads Bliss and his team into the heart of both bygone and current corruption and murder which brings them much closer to home than any of them are prepared for. The story is set in 2005.

The Scent of Guilt jumps forwards to the present day (2017 at the time), with Bliss’s departure and return to Peterborough explained. His first case becomes a serial murder investigation, which also connects to another on-going case being worked on by his old partner, DS Chandler.

If Fear Wins begins with the horrific murder of a local RAF officer, which ultimately brings the team into contact with the security services. Bliss shifts the emphasis of his own team in another direction entirely, but even he cannot believe what they discover towards the end.

The Reach of Shadows splits Bliss in two. On the one hand he has a stalker-linked murder case to run, but at the same time he is also being internally investigated for the murder of his late wife. The past comes back to haunt him, but Jimmy is desperate to seek justice for his new murder victim. With this book, a lot of dangling threads from the previous three are tied up, leaving Bliss – if he survives – to face the future with renewed optimism.

The Death of Justice will follow a more linear path for the team, who join up with detectives from Lincolnshire to form a task force hunting for a vicious killer. Unexpected connections with a case gone cold emerge, and soon Bliss and his troops are facing a race against time to save more lives – including their own.

The DI Bliss series is an international best-seller.

My Life of Crime