Death is a Welcome Guest by Louise Welsh, Book Review 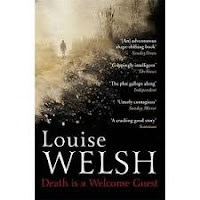 How badly do you want to stay alive? To what lengths would you go to survive? Magnus, an aspiring comedian, goes on the run with a convicted felon dangerous enough to have been in solitary for three years. You think being falsely imprisoned as a rapist would be bad enough, but imagine escaping into a world where millions are dying from a terrible epidemic, ‘the sweats’, where everything that ever mattered is gone. At this point I’d have given up. But Magnus doesn’t want to die. He really doesn’t want to die. In the author’s words, ‘the only way to vanquish the sweats was to return to a point where life was sacred.’ Except it wasn’t. Gangs were roaming the countryside looting, raping, killing. Human evil and crime are inextricably linked and ubiquitous – even in an apocalypse. Nevertheless, when the world is burning, does justice even matter?
After a thrilling prison break Magnus and his ruthless partner make it out of a burning, rioting London to the relative safety of the countryside where they are sheltered by a group of seemingly kind people. When other survivors can’t go on and commit suicide will Magnus be able to rebuild his life and get to Shetland to see if his mother and sister are still alive? Louise Welsh has a wonderful way with words. ‘I think his lust for life embarrassed him, but he couldn’t help it.’ But then his life is threatened again, this time by a killer in human form.

Louise Welsh, in Death is a Welcome Guest, thrusts us into a nightmare scenario. In most crime fiction books the crime causes the nightmare, here the nightmare comes first, only then does the murdering start. Seldom is a book so exciting and yet also so thought-provoking.