Showing posts from December, 2016
Show All

Hot off the press

Released today by Mulholland Books for £7.99, the intruiging and clever psychological thriller ‘Lie with Me’ by Sabine Durrant. Escape the winter cold by following the hero or, better still, anti-hero Paul Morris to a Greek Island where he hopes to recapture some of the promise his life once held. Some of us, the older and wiser ones perhaps, will know by now, that nothing ever turns out as we hope for, and soon the protagonist is stuck in the middle of a horrific nightmare.  The author Sabine Durrant, formerly of the Guardian and the Sunday Times, has written, among other novels, two further psychological thrillers.
Post a Comment
Read more

Plan Ahead! Some exciting reads for the New Year, Part 1

Published by Orbit in 2016 this mysterious thriller with a strong female protagonist, Jess Moulson, is partially set in a maximum security prison for women on the edge of the Yorkshire Moors. Did she commit the murder that put her into Fellside? Will she ever get out? The author M.C. Carey is an established novelist (eg. ‘The Girl with all the Gifts’, soon to be a film) and screenwriter. He has written for DC and Marvel (including runs on X Men and Fantastic Four).

From the USA and published by Headline in 2016, this is the 12th Kathy Mallory novel. This suspenseful novel features Mallory, a formidable NYPD detective, a dead nun, a disappeared blind child, and a massacre on the mayor’s lawn. The author Carol O’Connell has appeared on US bestseller lists and has been shortlisted for the Edgar Awards and the Barry and Dilys Awards.


Rise the Dark by Michael Koryta

Auntie Poldi and the Sicilian Lions by Mario Giordano 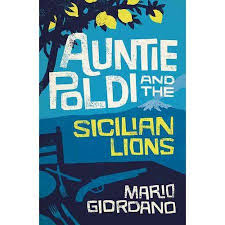 I love ‘Cosy Euro Crime’, it’s the best of both worlds - it takes me to places I love to visit in the company of some real characters and it leaves me feeling good as opposed to either emotionally raw or just numb after reading some gruesome Scandi-Crime. Not that there isn’t a place for brutal, realistic crime set in the cold icy North. However, writing this review in the North of England during December, an escape, even a virtual one, to a hot Mediterranean island is just the ticket.
Auntie Poldi, the narrator’s German aunt, retires to Sicily to drink herself to death while enjoying a great sea view. Having said that, she’s much too energetic to pop her clogs just yet, and so entertains herself by investigating the murder of her young handyman and by falling head over heels in lust with the detective officially assigned to the case. Does Auntie Poldi manage to sober up long enough to solve the crime and seduce the detective?

The Plague Road by L.C. Tyler 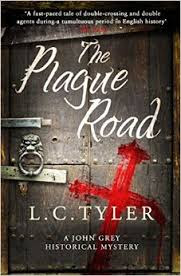 If you had to hide a body, which location would you choose? Can you think of anywhere your corpse  would never be discovered?  In his latest John Grey historical mystery, author L.C. Tyler came up with a cracker – a plague pit.
We are all familiar with the Plague of 1348 which wiped out between half and a third of the population of Europe. However, we are often less familiar with the deadly plagues which revisited various areas of Europe at different points in time, for example in London in 1657 when this book was set.
For those of you who have not come across the protagonist John Grey, he’s a lawyer and kind-of fixer who has successfully navigated the changing murky political waters from Parliament and the Great Protector through to the restoration of the monarchy. And what is even more amazing is that despite changing allegiance with the turn of fortune, he hasn’t lost the reputation of being a man of integrity. Loyal first to Cromwell and now to King Charles, he helps fix problem…
Post a Comment
Read more

Box sets and crime series should come with a warning 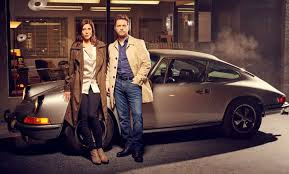 Warning – you could neglect your real friends with all their messy problems because your new screen friends attempt to take over your life. You will get to know and love all the characters and start living vicariously through them. Give in, in the end it’s much easier than hanging out with real people. In the last review I mentioned two violent fast-paced thrillers, today I’d like to point out two crime series with a gentler approach, but just as engaging. Private Eyes (in the UK shown on Universal Channel) is a Canadian series about Angie Everett, a feisty and delectable PI (played by Cindy Sampson) and charming ex professional ice hockey player Matt Shade (Jason Priestley), who becomes her new partner in the PI business. Set in Toronto this series makes me homesick in the nicest possible way. A second series has been commissioned and I’m already looking forward to it.
The other series, the police procedural ‘Rosewood’, is set in a warmer place, Miami. The crime drama centres on Dr…
Post a Comment
Read more

And oh! Father Christmas, if you love me at all... What better way to spend a rainy Saturday than curled up on the couch watching episode after episode of your favourite TV crime drama series? Back in the day when I only got one episode a week on TV it used to annoy me silly that I had to wait a whole week for the next instalment. Now I can gorge myself silly. I might complain about the younger generation not having any patience for delayed gratification, but kettle and pot spring to mind. And oh! Father Christmas, if you love me at all, bring me a box set for Christmas!
So what is out there now to replace old North American favourites like Rizzoli & Isles, Elementary, Castle, King and Maxwell, Murdoch Mysteries …? Well, I’d like to introduce you to four series I now like to watch. Two in this review and two next time.
‘Blindspot’ premiered in 2015 and is shown in the UK on Sky Living. This thriller is now in its 2nd season.  A beautiful tattooed woman (Jaimie Alexander) who has lost her memory, appears mysteriously in New York.…
Post a Comment
Read more

Who better than a brother keeper to access both Victorian worlds: the seedy underbelly of society and the hypocritical community leaders who both use and abuse the poor? Sherlock Holmes in this case is the attractive and confident Jean Brash, who survived the gutter and childhood abuse to rise to the position of madam of a classier than usual establishment, The Just Land. This brothel lends its name to the title of this murder mystery written by David Ashton, ‘Mistress of the Just Land’. Another important player in this game is Inspector James McLevy (from the BBC Radio 4 series) who sets out to investigate who is murdering upstanding members of Edinburgh society. Unsurprisingly, he begins his search for information at the obvious place: the best brothel in town. A familiar face at The Just Land, does he suspect Jean of involvement? How could he possibly know that a corpse was found in the brothel basement strapped to a Berkley Horse, an apparatus of chastisement (S & M to the mo…
Post a Comment
Read more
More posts