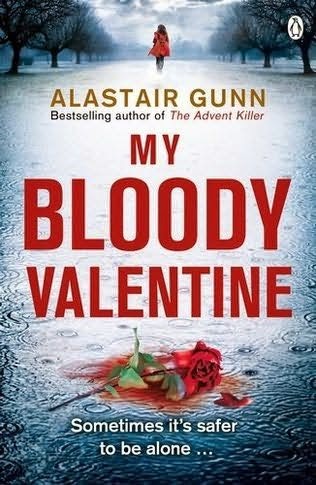 I received this book on Christmas week and as soon as I read the blurb on the back cover I decided that My Bloody Valentine would be my ‘relaxing Christmas  read’ – Don’t get too relaxed reading this though – the tension  is high right from the get go.

Recovering from life threatening injuries from her previous high profile serial killer case, Acting DCI Antonia Hawkins forces herself back to work when a woman is found murdered on Valentines’s Day and the press link her death to Valentines Day.
Soon, as the murders mount up, Hawkins has another serial killer to chase whilst a new addition to her team seems determined to usurp her role and her boyfriend is over protective.


This is the second of Gunn’s books featuring Antonia Hawkins.  I thoroughly enjoyed his first book The Advent Killer but in My Bloody Valentine I feel he has developed his craft as a writer which is lovely to see in a new author.
Gunn’s plots are clever, well thought out and convincing with strategically placed clues throughout.  The idea of a killer acting as judge and jury keeps us focussed on the perpetrator and Gunn skillfully drip feeds us info abouit him and his experiences which make him believable as a character.

The relationship between Hawkins and her DI/boyfriend Maguire is compelling and Gunn’s use of flashbacks give us a real sense of the perpetrator without revealing the twist at the end.

If you like police procedurals with loads of tension and plenty of high octane car chases/war scenes then this is for you.