Book review: A Life to Kill by M R Hall - brings home some of the more unpleasant truths about faraway wars

I’ve read all of The Coroner series by M R Hall and been waiting for his newest book A Life to Kill for ages.  It was well worth the wait!

So what’s it about? An army platoon in Shalan-Gar, Helmand is close to going home after a punishing tour where comrades have been killed in action.  On the final night, “Skippy” Lyons inexplicably vanishes from their fortified and closely guarded compound.  Information comes their way that he’s being held by local Taliban who want a ransom for his release.  The negotiations turn out to be a disastrous trap for the platoon and after a fierce firefight, Green is dead, Roberts’ legs have been blown off, Carter has a severe head would and Lyons is still missing. Once the company is back at Highcliffe camp in the UK, Jenny Cooper is asked to lead the inquest into Green’s death, which as you can imagine will have lots of twists and turns and a shocking ending when the truth is finally exposed. 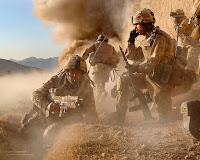 So, what did I think?  Fantastic! And for so many reasons.  One of the things A Life to Kill brought home to me was the reality of front line life in Afghanistan.  Harsh is a clichéd understatement.  You see that fighting an insurgency is not about set piece battles but a constant, gruelling, daily struggle in a severe and unforgiving environment patrolling in heat and dust, with only the most basic amenities in their operating base.  The emaciated appearance of the platoon once home is as shocking as the difficulties the soldiers have adjusting to home life after six months in a combat zone.  Hall’s illustrative vignettes are all the more powerful because of the way they are quietly stated – no shouting, no preaching, just quiet, awkward facts.

Hall's depiction of army culture and behaviour is fascinating and frightening – closing ranks against any outside scrutiny, as if being honest about what really goes on, even then that were a wrongdoing, would not just be disloyal, but downright betrayal.  When we find out what actually happened that final morning in Shalan-Gar and the cover up that followed, I could only be amazed at Roberts’ bravery in speaking up so the truth finally came out.

Reflecting on what happened and why, as well as the age of the young men involved, I thought that the sacrifice that people glibly talk about isn’t just about those who died but how it changes the lives and even the very minds of the men who fight, how it affects their families and their long term prospects of being normal members of society.  It did lead me to think about what we owe our service people and whether they really have enough of the right support to help them readjust to civilian life long term.

That’s right – it’s definitely a serious story and there’s certainly a good cast of characters to tell it.  Simon Moreton’s still there, although you soon find out he’s only just hanging on; Alison Trent is still a bull in a china shop and there are some newcomers.  Claydon White and Carrie Rhodes – highly skilful advocates but to me they’re just mercenary ambulance chasers, which makes me question the ethics and values of parts of our legal profession.  They contrast sharply with Highcliffe’s close knit wives and girlfriends community, who provide human and material day to day support support for each other, whatever their personal circumstances are.

One final thought about the book.  There’s always a Machiavellian undertone with the things that happen in The Coroner novels.  In A Life to Kill there are so many from the unannounced investigations by the HM Revenue and Customs, to the sudden inquiry into the actions of Cooper’s partner when he was a military pilot during the Iraq war.  The one I found the most disturbing was Lee Roberts being sedated and then sectioned to stop him revealing what really happened at Shalan-Gar, even though he kept to the unwritten code, consistently refused to say anything about that fateful day.  Vile and perverse is the only way of describing this – I really hope this is only fiction.

Final verdict – An excellent book that’s uncompromisingly honest about what many people would prefer to ignore.  It’ a definite yes from me and you don’t have to have read the other Jenny Cooper novels – this works excellently as a standalone book.

PS – here’s a link to a YouTube video of readers’ reaction to A Life to Kill: