Book review – Everyone Lies by A D Garrett: a brand new writing duo that bring together the best of crime writing and forensic expertise 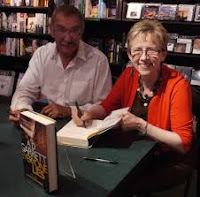 Writing duo’s aren’t that common but tend to be partners who are both writers.  It’s interesting to find a writing team where one is a writer and the other a technical expert.  A D Garrett is the pseudonym of Margaret Murphy, an established prize winning thriller writer and Professor Dave Barclay, lecturer and highly experienced practicing forensic scientist.

I first highlighted Everyone Lies in my April “Hot Picks”.  It’s  Murphy and Barclay’s first book as A D Garrett introducing Nick Fennimore, a forensic scientist scarred by the unexplained and unsolved disappearance of his young daughter and DCI Kate Simms, who has relocated to Manchester trying to rebuild her career after the failed investigation into the disappearance of Fennimore’s daughter.

The plot centres on drugs, prostitution and murder in Manchester.  Although Simms quickly solves a case involving adulterated drugs she is unconvinced by the person who confesses to the crime, feeling that some small fry has been paid to take the fall and leave the big fish free.  Simms enlists Fennimore’s help, unofficially of course, and they are drawn quickly into investigating a murder that appears tangential to the drugs case, but is the key to resolving a number of prostitute murders. As the pace hots up, their find in an abandoned factory in Humberside leads them to realise that some of the answers are closer to home than they realised.

Particular strong points for this book are the real detail about forensics and seeing the way that Simms and Fennimore work through information and clues to develop hypotheses and lines of investigation.

There are times when you can see the experience and real life cases that Dave Barclay brings to the partnership.  The Manchester setting is convincing and both major and minor characters are developed well.  I felt that the pace dipped a little part way through, but then just took off so much, I couldn’t have a planned break from reading the book.  Mrs Romancrimeblogger wasn’t impressed that I hid myself away for most of Saturday because I wouldn’t stop reading, but it was worth it!

I’d say the Murphy/Barclay partnership works well and I’ll look out for the next one in the Simms/Fennimore series.  If you’re a fan of forensic science and investigative detail do read this book - you’re in for a treat.

PS - Today, 1 September, Everyone Lies is only 99p on Kindle!!
Reviews Roman